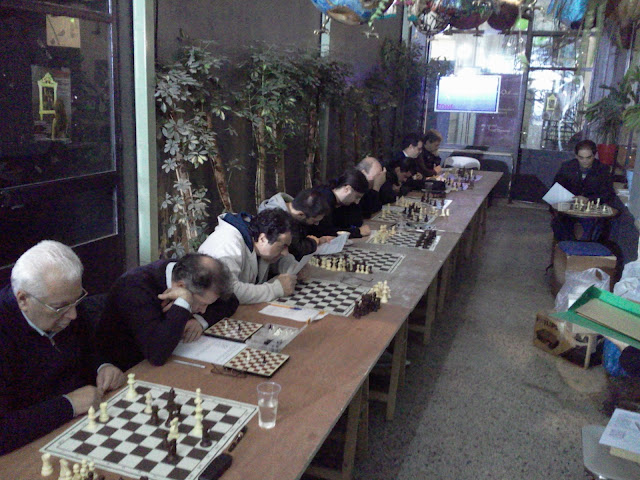 (See (lower left in picture) that I have not put in its place the wPf4 in the two-mover. Eventually, after several minutes, I thought "this could be solved if it had a wPf4". I looked in the sheet of problems, and there it was!)

The Solving Contest of Attica 2012 took place in Booze Cooperativa (57 Kolokotroni str., Athens) with cooperation of ESSNA (Union of Chess Clubs in Attica) and "Athletic Club Zinon of Glyfada" on Sunday, November 25 afternoon, last 1 hour and 45 minutes (not 2,5 hours as planned). After the contest, in memory of Lorenzo Mabillis poet, fighter and chessplayer, and his heroic death a hundred years ago, started a presentation of facts and pictures of Mabillis, his life and his era.
In the contest six problems should be solved, 12 solvers gave answers, and many other visitors passed and received information. 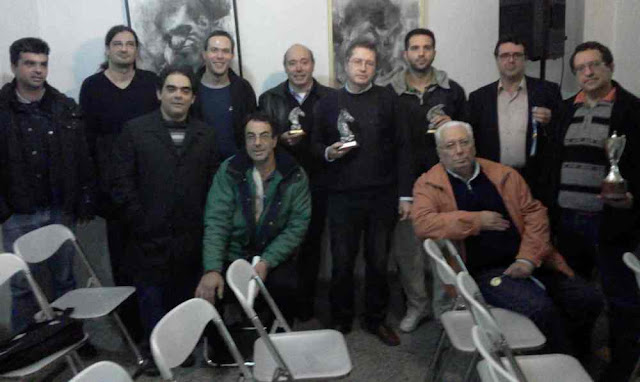 Winner was Nikos Mendrinos with 24 points (in 30 maximum), second was Leokratis Anemodouras with 20 points, third was John Garoufalidis with 18 points, fourth was Emmanuel Manolas with 16, fifth was Harry Fougiaxis with 15 and in sixth position two solvers, Kostas Kordis and Alexandros Seilemezis with 13.
The compositions were relevant with the work of the pioneer Greek composers of 19th century, Dr D. Melissinos, Joseph Liberalis, Nicolas Miniatis and Lorenzo Mabillis. A musical work was heard again after many years of latency, "Elegy for the death of the great American chessplayer Paul Murphy", composed by the Greek Joseph Liberalis in 1884.