The condition has got interesting strategic applications, which become apparent just as the kings acquire super-powers(!), but soon the time for the checkmate comes. In the present post we are interested only for compositions where the king is mated in five of his phases, (in the final pictures of the five checkmates appears as king, as queen, as rook, as bishop, as knight), which we have named as 5-phasic.

Let us see now some 5-phasic problems by Greek composers.

A Task from Nikos Pergialis

There are composers of chess problems in various countries of the world.
In some countries there is support from the state, there are schools with teachers and students, and they have production of nice compositions.
On the other hand, something odd has been observed in Greece : in various times there is lack of peace - comfort - good health - free time, and again some important composers appear.
An example was Demetrius Kapralos. In our era, an example is the last Rebetis (remember the rebetiko song!), the aged but productive Nikos Pergialis.

Below you see a direct two-mover of his, with white royal battery (the king is the front piece and when he moves, the rear piece delivers mate). For the royal battery, the maximum number of thematic variations in an orthodox two-mover is six. Nikos Pergialis achieves that, this is a Task, and he says

This Task, my urchin friends,
I bring to you with pride.
With only a dozen pieces
- I think it is first time!

In her well-known wep-page http://juliasfairies.com/ Julia Vysotska from Latvia had announced a Composition tourney for fairy chess problems.

It is quite interesting and there are already about 100 problems published, some of which were lucky enough to receive comments from excellent composers (teachers actually!).

I have also sent some problems and she have posted them in two nice pages. Many thanks again from here!

Four problems with KoBul kings (they take the properties of a captured friendly piece, they return to normality when a a friendly pawn is captured), that may be seen here : http://juliasfairies.com/problems/page-41

Three problems with condition Black Maximummer (in which is easier to control the black pieces since the possible moves are few), that may be seen here : http://juliasfairies.com/problems/page-46/

The first declarations of composition tourneys have started to appear, for the 55th WCCC (World Congress of Chess Composition) which is about to begin for 2012 in Kobe, Japan. Simultaneously, there will be held the 36th WCSC (World Chess Solving Championship).
Official web-page : http://wccc2012kobe.com/
.

Alexis Murillo Tsijli, an International Master from Costa Rica, during his presence in Greece for visiting relatives and playing chess in various summer tourneys, asked to meet me. I accepted and the appointment was set for Nea Smirni (Athens, Greece). For easy recognition, I was wearing a t-shirt with a chess-queen, a gift from the friendly Italian composers (see API, Associazione Problemistica Italiana) since last year in Jesi, where the WCCC was held. 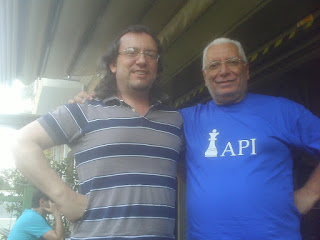 (Thanks to ms. Caterina for the photo).

After the meeting, my friend Alexis posted in his blog ("the good Chess!") a description about the Greek chess situation, which can be seen here : http://ajedrezdelbueno.blogspot.gr/2012/08/encuentro-con-emanuel-manolas.html.
Posted by Emmanuel Manolas at 8/10/2012 01:08:00 pm No comments: Links to this post