In the morning the delegates of the countries had a meeting for last decisions. The next World Congress for Chess Composition (58th WCCC) will be held in Ostróda in Poland from 01 thru 08 of August 2015. The Ostróda is a small city with developing tourism due to the lakes of the area. (The other candidate, Burgas in Bulgaria, did not gather enough votes).

After the meal, the presentation of titles for new Masters and of results for the composing tourneys started. The Greek solver Nikos Mendrinos become FIDE Master in Solving, (among many others).

Every composing tourney is related with a country. The Award contains Prizes, Honourable Mentions, Commendations, and some presents are given to composers. The best (among the Congress participants) receives a bottle with drink of the related country, and the next receive books, t-shirts, pottery items, dolls etc.. The tourneys are named accordingly : French Champagne, Japanese Sake, Romanian Juika.
Until last year the Greece was present with a Metaxa Brandy tourney, but the organizer Pavlos Moutecidis did not come to Bern.

For the Greek composers, as you can see in the Congress Bulletin (http://www.kunstschach.ch/wccc2014/docs/WCCC2014_Berne_Booklet.pdf) ...

In the afternoon we were invited by Mayor of Bern. He presented with humor the city of Bern, which holds the same face the last five hundred years, and he offered sausages, wine and refreshments.

The farewell dinner was held inside a military gymnastics room, which was converted to a restaurant, and the last prizes were given to veterans and organizers.

Today, a warm summer day, we went to an excursion.
We went to the lobby for breakfast all at the same time, the personnel of the hotel was running to serve us but the space was not enough, a long queue was created and we were anxious to catch our bus, leaving 08:15.
With Suisse accuracy we managed to be seated in the bus at 08:14. The driver came half an hour later and we happily started our day-trip.

I stop grumbling. It was an extraordinary experience! 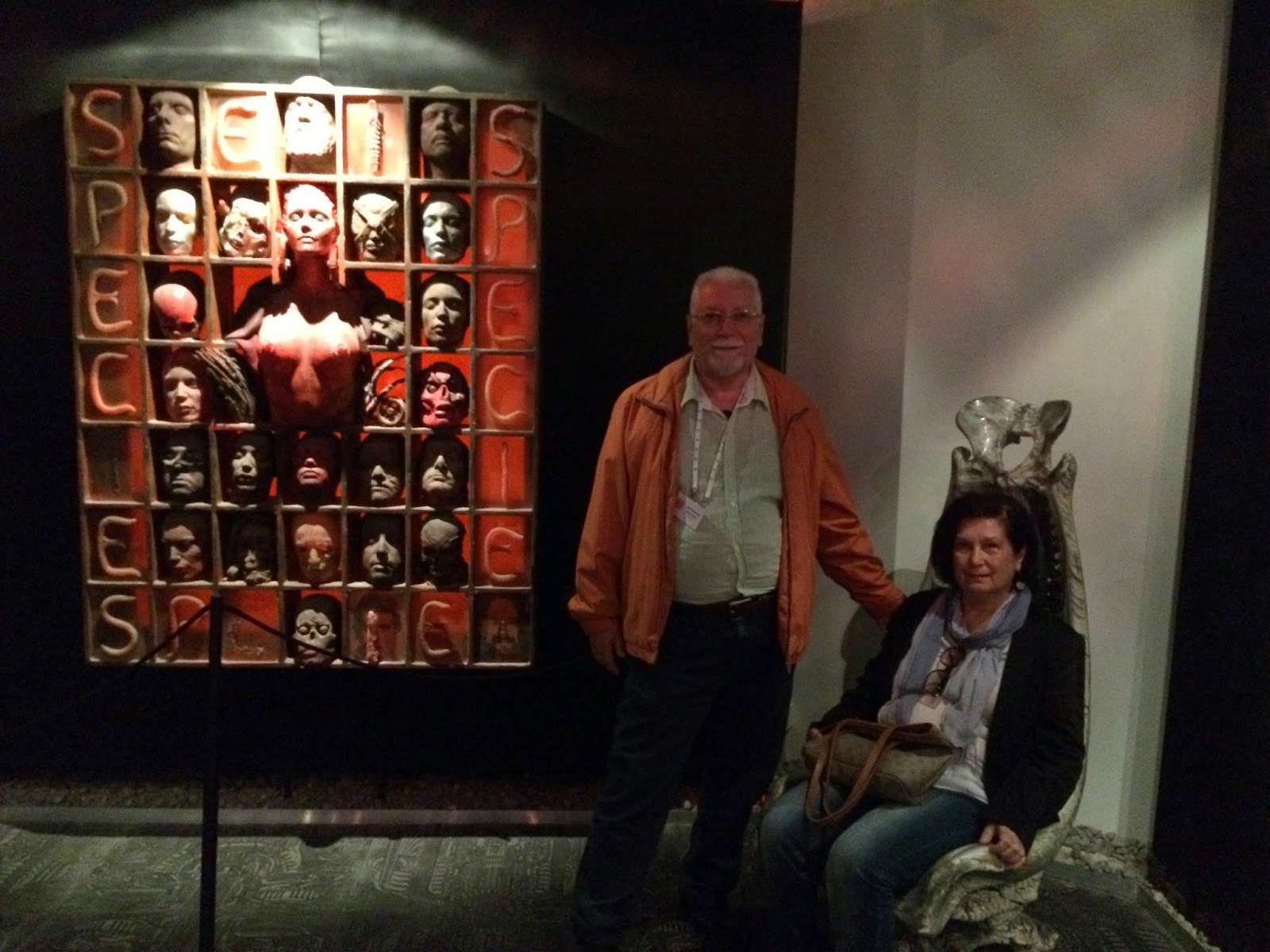 (Me and my wife, in Giger museum. Photo by Diyan Kostadinov)
We went first to the highland village Gruyeres, at the foot of the Alpes. Putting aside the great view, which can be found in many places of the Switzerland, in this village there is the H. R. Giger museum. A three-stories building with fifteen or more rooms (I lost count) full of paintings, sculptures, furniture, books, posters, with abundant fantasy of the (Oscar winner) creator of the monster Alien (and more, and more...).
Furthermore, a cherry on the cake, a Giger Bar opposite the museum, where chairs, floor, ceiling, lamps are designed by Giger.
In the village a concert started with Alpine music Horns. Unbelievable sound.

Next we visited the chocolate factory Caillers.
Christopher Colombus brought to Spain the seeds of cocoa-tree, after he killed the Aztecs to avoid royalties, the Royalty in Spain liked the new drink but the Church was against at first, and only after the pope had tasted it, he blessed it, and the chocolate drink started to reach the not so rich people. After the French Revolution, a dude named Caillers decided to make a factory for chocolate in the peaceful Suisse. His company held ownership for a few centuries, the grandson Caillers moved the factory to Gruyeres vicinity to have easy access to milk and water sources, but after the WW2 a partener named Nestle, initially a pharmacist helper, with admirable dexterity took hold of the factory and everything else.
The presentation was like a fairy tale ... only Willy Wonka was missing. The taste of roasted cocoa seeds and of ready products was totally satisfactory.

Is it possible to visit Gruyeres and not taste their famous cheese? We went to the factory of Suisse Gruyere Cheese, bought chunks ripen for 6, 8, 10, 12 months, and we returned to Bern.

The roads were impeccable, well designed, the tunnels wide and well lit, the speeds quite high, and all these days no-one used a honk. Quiet and clean air.
The Suisse people use high technology (for example every door in a building or in a vehicle opens automatically when you touch it) but they have not abandoned the previous way of life, with cows, horses, corn fields and all the things that characterize a farmer. But they have also many industries and manufacturing plants. (Did I mention banks?)

In a while, for the chess affairs that interest us, the President of the World Federation for Chess Composition wil be elected.
In the last four years, the Greek Mr Harry Fougiaxis was President. I wish him an easy re-election!

The 38th World Solving Championship is over.

Personal ranking of the Solvers here.
In the first places, World Champion the Polish Piorun Kacper 81 points out of maximum 90, second is the Polish Murdzia Piotr 81 points out of 90 but he spent more time, and third is the Serb Vuckovic Bojan 79,4 points out of 90.
The Greek solvers Prentos Kostas, Mendrinos Nikos and Konidaris Panagiotis in places 33, 50, 73 respectively. Congratulations to all solvers!

Team ranking of the Countries here.
In the first places Poland, Azerbaidjan, Israel.
Greece in the 17th place.

The 18 problems are here, for anyone wanting to solve them.

The solutions of the 18 problems are here, for anyone wanting to study them.

In the evening, at the contest Solving Show, with participants 32 of the best solvers in the world, in first place finished the British John Nunn, winning at the last moment the Serb Marjan Kovačević.
Posted by Emmanuel Manolas at 8/28/2014 11:00:00 am No comments: Links to this post

Today the solvers start their ordeal, (Greek solvers are Mr Konidaris Panagiotis, Mr Mendrinos Nikos, Mr Prentos Kostas), trying to place themselves in a high position in the World Championship. They will continue tomorrow. Below you will find the preliminary results of the day.
There is personal ranking and ranking of countries.

I prepared my entry to Official 5-days composing tourney, where the theme asked for an orthodox direct-mate two-mover with a twin. The twin is made by moving a white Bishop to square of different color.
I worked with three positions, from the simplest miniature to a complex mechanism. (I have lost count, but I needed to compose almost twenty problems this month).

In the evening there were some chess lectures.
Mr H.P.Rehm analysed the beauty criteria of the pendulum mechanism in more-movers.
Mr D. Kostadinov presented mechanisms for inverse problems worthy to win prizes.
Mr M. Kovačević showed that in some underrated helpmate problems real diamonds are hidden, if notions of direct-mate composing are applied.
Mr T. Linß presented the past and future of computer software creating compositions. (At present, the demands of storage space limit this software to 6-pieces helpmates and 7-pieces selfmates).

All day drizzled in Bern and during the night we had heavy rain.

Results of the first part of the World Championship here.
Posted by Emmanuel Manolas at 8/27/2014 11:00:00 am No comments: Links to this post

Actually, I came to the World Congress for Chess Composition (WCCC) for the chess composing tourneys.
I gave some compositions of mine to various judges and, having free time, I went to the Open Solving Tournament to see if Mr Axel Steinbrick will beat us down with his selections. As you can see in the results here, I am in the first 100! (Also, this was the number of participants).

Result? Laments, with the world champions in the middle positions. (Thus, the new solvers must have hopes!) If you want to exercise yourself with these problems, cover the solutions and set the time limit to three hours. (I have tried my luck with 5 problems from the 12).

At 20:30 the Quick composing tourney started, ending at midnight. They asked for two-movers direct-mate or help-mate (2# or h#2) with the fairy piece Lion, of the category Hurdle jumpers. (Lion moving in Queen lines, from starting square to ending/capturing square there should be only one occupied square. The piece in that occupied square is the hurdle. There are also Rook-lions moving in Rook lines, and Bishop-lions moving in Bishop lines).
The quirk was that the hurdle should change color when the Lion were jumping over it (an exception is when hurdle is the King). The problem solving program WinChloe could not handle it correctly, and for the program Popeye a download of version 4.69 from the Internet was necessary, in order to check the correctness of my composition. I worked together with Kostas Prentos until midnight, we gave to the judge an easy entry, and we promise to continue working to finish the "masterpiece" which we could not have ready in time.
(See here one composition of ours with controversial comments).

As you know, we participate in the World Conference for Chess Composition, which will be held this year in Bern, Switzerland.

We arrived yesterday flying with Alitalia (Athens - Rome with delay, running then to catch the flight Rome - Zuerich), two friends lost their buggage, and we went by an electric, robust, fast and quiet train to Bern. The Switzerland is green all over and full of industries. Its villages are full of pretty houses.

Today the sun is shining and we admire the pretty city. Quiet, clean, build with uncluttered nice old houses, at most 4 stories high. The transportation are noiseless, electrical, having instant information in tables inside and outside of the vehicles. There are a few cars and many bicycles.

The hotel has minimal offers, no sampoo, no closet, no fridge, no telephone for awakening, nor other such silly things. The cost seems huge for our wallet, and it is a lucky coincidence that the Greek Chess Federation is NOT supporting us, so it has no danger to go bankrupt. The television is working nicely, showing about sixty channels speaking german / english / french / arab / chinese. The internet is fast and free.

Today we went by téléférique to an excellent park up a hill inside the woods. The children are joyful playing many games and the grown-ups have he opportunity to walk in paths among the trees.

The weather can be very cold there, so the cows pasturing there have long brown hair. The black with white patches model is for low altitude areas.

Basic info about Bern and about Suisse habits you can find in a series of articles here.

Chess can make you smarter.
A nice presentation by Cody Pomeranz https://www.youtube.com/watch?v=A3yDvM8aplY

Next Saturday we will be in Bern, Switzerland, for the 57th World Congress of Chess Composition, WCCC. 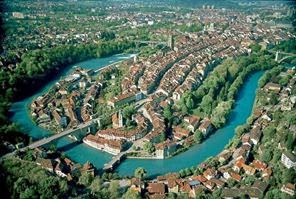 There will be solving contests and many composing tourneys.
The schedule is here: http://www.kunstschach.ch/wccc2014/docs/WCCC_Schedule.pdf

For the solving contests (there is one OPEN solving contest and also the world championship WCSC) you must have physical presence in the rooms of WCCC, but for the composing contests this is not necessary.
There are tourneys that accept entries from all over the world via e-mail, as well others only for WCCC participants. Details here.

Best wishes for success to solvers, to composers, to organizers!
Posted by Emmanuel Manolas at 8/20/2014 11:08:00 am No comments: Links to this post