I will close this December wishing health and success to all composers.

Let us hope that the New Year 2017 will bring joy and happiness to everyone.

The first is a helpmate threemover with fairy condition Circe : Black plays first and helps White to mate. In the meantime, any captured unit is reborn on its initial square (initial as in the start of a chess game).

The second is a directmate twomover with fairy conditions Circe and Madrasi, and also two fairy pieces Nightriders. We spoke previously about Circe.
Madrasi is a condition of paralysis : When two pieces of same type and different colour (wR and bR, wQ and bQ, etc) are threatening each other, then they are paralysing each other, until the end of threat.
The Nightriders are pieces of linear way of moving, with Knight steps.
In this composition all the tries and all the white moves during solution are done by the white king.

What time is it?

In the Over-The-Board game of chess usually they count the strength of the pieces with measure unit the one (1) pawn.
(Of course this is quite simplistic, since the strength of a pawn is greater as the pawn gets near its promotion line, but we can overlook it for now).

The Bishop and the Knight have worth three pawns each,
the Rook has worth five pawns,
the Queen has worth nine pawns.
The King has infinite worth, since the game ends when it is certain that the King will be dead in the next move.

If you have postponed it, now is the time to learn chess! You will have only advantages. 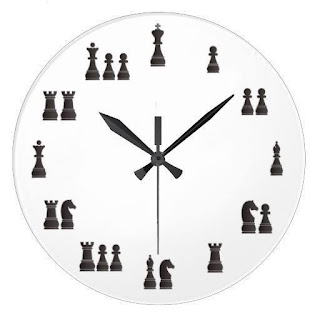 There is a good work about studies, by Panagiotis Konidaris, published in Greek. Mr Konidaris is a writer and chess-player from the island Meganissi, near Lefkada, Greece.
The studies are compositions (that is they are not necessarily endings of actual OTB games, but they are created by a composer), aiming to show some hidden features of game endings.
Here the composer and solver Konidaris has selected some memorable studies for presentation, explaining the solutions in a pleasant way. I will not translate the text, but I believe that you can see the studies and their solutions.