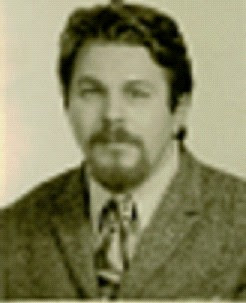 Mr. Carlo de Grandi was born (1948) in Venice, Italy. He studied Accounting and Informatics in Athens.
He has written the following books (in Greek)
(1) "About the origin and spreading of Zatrikion (Chess) through the centuries", (Istorical report). Athens, 1985 (1st edition), 1989 (2nd edition)
(2) "Istorical report for Magic Squares and Magic Stars", Athens, 1999
and he is preparing his third book "The Mathematics of the Party".

He learned to play chess when he was 10 years old. Later he limited this activity to chess by post only.

He is a composer and a solver of chess problems.
Since he started composing, in 1989, he has created more than 120 problems.

He has organised 26 Contests of Solving Chess Problems.

In problem-208, by Carlo DeGrandi, there is an interesting continuation with sacrifices of white pieces and guidance of black pieces. But the bK has always very restricted mobility, and there is only one series of moves.

In this twin problem-209, by DeGrandi, the key changes together with the piece that guards g5, but the mechanism of mate is the same.