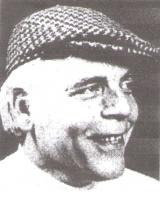 Mr Nikos Pergialis (28.02.1931 - ) is a creator – performer of rebetiko songs, with great history in this kind of music. He is also good chess player and very good chess problem composer.

I remember him walking around the tables and watching the games back then (end of sixties), when the Greek Chess Federation (E.S.O.) was on Akadimias street, opposite the church [Zoodohou Pigis].

Various persons have written about Nikos Pergialis, the very richly talented "rebetis", and this is easily ascertained with an internet stroll...

_Panos Geramanis in the newspaper [Ta Nea (=the news)] (07-07-2003),
...Nikos Pergialis is an artist with a double capacity. He composes and sings rebetiko songs but parallely makes problems and exercises for chess (Mate in two or three moves, etc). He is considered one of the few authentic and pure "rebetes" and he has deep knowledge of the artistic...

_the chess column of the newspaper [Rizospastis (=root-breaker)] (10-10-2004),
...one very beautiful and strategic problem based on theme Albino, by the known composer of chess problems and artist of rebetiko songs Nikos Pergialis. Well, white plays and...

_the column [Diktio (=net)] in the newspaper [Ta Nea] (14-4-2008),
[Anadromi Nota (=reverse musical note)] - nights with rebetiko songs, (for the oldtimers - to remember, for the youth - to know, for the memory of the rebetiko pioneers - to be honoured, for those who wrote and sung while the establishment of that era prosecuted them and disdained them), are organised today and tomorrow by the "ultimate rebetis" Nikos Pergialis, in the [Mezedopolio (=delicacy shop) Nota (=musical note)] (Varnava square, Pagrati, tel. 210-7015169). Pergialis is a living part of the history of rebetiko in our land. He first listened to Markos Vamvakaris, Stratos, Batis and the rest pioneers of the genre, while he was still a baby in the arms of his father, who has died during [Katohi (=occupation of Greece by the Germans 1941-1945)]. Pergialis later has sung at the side of Markos Vambakaris, and also of Papaioannou, of Pagioumtzis, of Bagianteras, and of several others. In today's and tomorrow's performance together with Pergialis will appear Maro Lytra, Nikos Tagas, and the great hand of the bouzouki stroke Kostas Vamvoukos. This is actually the culmination of the musical performances, which have kept company to the friends of the genre all this winter and will be repeated next winter. In the summer Nikos Pergialis will be in Ikaria to entertain the local people and the summer travellers of this Aegean island, while he will hold an active role at the international chess tourney [Ikaros], since the multi-talented artist, besides being a composer and performer of songs, is also a composer of chess problems and strong chess player! ,

_the web page of [ΑΕΚ] about the formation of its chess team (28-2-2008),
...It is a notable fact that in the roster of our association belong chess-players, who are recognisable in areas beyond chess. Specificly, in our team belong the actor Takis Papamattheou, the "rebetis" Nikos Pegialis, the painter Nicolas Sfikas...,


I met Nikos Pergialis (on Sunday 10-08-2008) in the area (President hotel) of tourney [Acropolis] by his request. He thanked me for the post (Symmetry, 22-05-2008) presenting one of his problems. He told me about his life and about some great persons of the chess composition, as is Dimitris Kapralos, who are not widely known. He showed to me a nice Duplex problem (see it below) and he promised that he will give me soon a set of his problems for publication. When I receive the problems, I will post them. He also wrote down some verses he composed about chess :

(Ine to kathe provlima tou pnevmatos pegnidi (=every problem is a play of the mind).
Kathe idea zografia, kathe pessos stolidi! (=every idea is a picture, every piece is an ornament))

In the meanwhile, I have noticed in another blog [Neos Palamidis (=new Palamedes)], 14-08-2008, a nice presentation of Nikos Pergialis, with cellphone photos and an orthodox problem.

It is a good thing that the splendid work of the artist (in song and in chess) Nikos Pergialis is recognised from more persons.

The Duplex problem has a difficulty in construction, because is a two-directions helpmate.
(1) Black plays and helps White to mate.
(2) White plays and helps Black to mate.

In Pergialis's miniature all the pieces on board have an active role. The two solutions are :