Puzzles of the season

Best Wishes for all!

Problems for year 2008 :
25-12-2008 : Play Santa-giving-presents. Read biographical details of John Nunn, who selects and annotates this year's problems. Solve the direct-mate moremover. Do not hesitate to give Knight (easy) and Queen (where?) in order to achieve eventually mate with subpromotion of c7.
26-12-2008 : In the five-mover helpmate (where black plays first) close for a while the Bishop, which will go finally to g8.
27-12-2008 : The study can start with a checking-key, (since Black can mate in 3 moves), let us say with the Bishop on h4.
28-12-2008 : In the six-mover selfmate, (White plays and forces Black to win with mate,) two knights are sacrificed first.
29-12-2008 : To avoid the diabolical trap of stalemate in this study, give the Rook on the fourth move and the Queen on the tenth.
30-12-2008 : Eleven Black moves (begin with Re5, end with Be8) and then one White move (dxe8=Q) stalemate! It is very interesting to discover the intermediate moves.
31-12-2008 : For the five-mover selfmate, the Bishop makes a big clockwise round to d2 and the Queen is sacrificed on the other side.
01-01-2009 : Starting from the initial placing of the pieces for playing a game, we reach the position of the diagram after the ninth move of the White. The Shortest Proof Game is a nice problem with Retroanalysis. (The page that shows this problem contains a form on the upper left corner for everyone wanting to send solutions and comments to John Nunn). 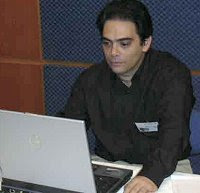 "I was born on April 20th 1966 in Athens. I graduated as an electronic engineer from the National Technical University of Athens (NTUA) and I am currently working as an instrument and industrial automation engineer in oil and gas applications. I am not married.
My father taught me the moves of chess at the age of 7 or so, and three years later I joined a local chess club. I was soon hooked and quite liked the friendly atmosphere there. So I started studying intensively, but after some time I realised that I could not really withstand the pressure of competitive OTB chess.
Meanwhile I was frequently finding that I was more and more thrilled by the chess problems that I encountered in Triantafyllos Siaperas's weekly newspaper columns, even if I was just average as a solver. My very first attempts to compose were when I was about 15. The Greek chess problemists' society had announced a national competition for beginners and I sent in a couple of entries. Thus I came to meet Byron Zappas, Dimitris Kapralos, Pantelis Martoudis and Nikos Siotis, who used to have regular meetings; they all helped me a lot with their comments and with chess literature. However, my first "true" teacher turned out to be living some 500 km away: it was Pavlos Moutecidis who influenced me the most. We exchanged letters continuously for more than 5 years and we eventually became close friends, despite the distance and the age difference. Strangely, I was not particularly attracted by selfmates (Pavlos's specialty), but by helpmates, which I have studied continuously for the past 25 years.
I have so far published about 150 problems, certainly not many, the vast majority being h#2s, some with orthodox and some with fairy units. I should admit that I have been rather lazy lately, composing only occasionally (during PCCC meetings, for instance), but my interest to chess problems has never faded. It was a great honour and pleasure to host the PCCC congresses in Greece in 2004 and 2005, with the support of the Greek Chess Federation and of the few, but hard-working Greek problemists. I was awarded the title of International Master in 2001 and I have acted as a FIDE Album judge four times".

The untired Harry Fougiaxis continues supporting various events, as you may see in the recent Solving Contest in Patras, doing his best for the Greek Chess.

The Grasshopper is a hopper (moves on a row or file or diagonal and goes exactly behind a hurdle). (Explanation here together with another problem by Harry Fougiaxis).
The Nightrider is a rider (linear piece moving with multiple Knight-steps).
The problem (a) is shown on the diagram.
To create problem (b), the white Grasshopper of a8 is placed on a7.

Interesting geometrical play including Nightrider moves with opposite vectors. Note that in b) the pin of bNf6 by the wNh7 plays no active role in mate!

I can not write about chess and chess problems, when a certain fact presented to us without proper study as isolated, keeps running in my thoughts.
Perhaps a composer would decide to transcribe the tragic theme into a slow-playing music, but he should not be surprised if this music actually sounds like a march.
The key-word these days is anger and it will be a task if they can manage to repress the reaction - already growing as if touched by a fairy - without significant changes.
Even with the help of a perverter of justice they can not present the facts with reverse meaning, saying that the victim itself was guilty and the shooter was innocent.
The uniqueness of a boy has a fabulous value, that no economy can estimate.
It has a beauty, that even the art can not easily describe.
Since I have a special interest for Greece, I find it very difficult to function as solver or as problemist using the grey cells of my brain.
What I see is white - black.


2008-12-06, Athens Greece, a peaceful Saturday afternoon :
A 15-year old boy was deadly wounded in the middle of the street with a bullet in the heart, when a cursing policeman fired at it three times.
Many by-standers have testified that this happened without any provocation from the boy.
The reaction is in the news.

The 51st World Congress of Chess Composition (WCCC) took place in Jurmala of Latvia, 30 August - 06 September 2008.
The Greek colors in the area of composition were represented by the composers mr Kostas Prentos from Salonica and mr Panagiotis Konidaris from Meganissi Lefkadas.


Champagne Tourney (Champagne is a beverage from France)
Judge : the French Michel Caillaud, GM in composition and GM in Solving, who has specified the following theme:

Theme : Retroanalytic problem where a piece is pinned in two different lines.
Group A : Shortest Proof Games (SPG).
Group B : Any other kind of Retro problem.
Mythical conditions are allowed (at most two in any phase of the problem).

"SPG 19" means "Shortest Proof Game in 19 full moves (white and black)". We must start the chess game from the initial position of the 32 pieces and reach the position of the diagram in 19 moves.

Judge's comment : A record presentation of 6 different pin-lines for the thematical Pf7 cannot be ignored by the judge. The first pin shows some strategical play with unpinning; the following are of the shielding type, accompanying black king in its walk, some of them being hardly exploited (f3-f5-f7 is of little use as King has to escape g4-f5-e6 before fxe4 is played).

Here are some needed explanations :

-n Proca Retractor : White takes back n legal moves. Black is not helping, but selects moves that will bring difficulties to the plan of the White. After the retraction of the moves, the solution proceeds forward.
This specification took its name from the composer Zeno Proca (1906-1936).
(A different type of retractor is Hoeg Retractor, where a helpful Black decides if the black move was a capture and chooses the type of the white piece that were captured. This specification took its name from the composer Dr. Niels Hοeg (1876-1951)).

Circe assassin : The captured piece appears on its square of regeneration even if the square was occupied. The piece that had occupied the rebirth square is lost. If the occupier before the capture is a King, he is in check. (See here and here for the condition Circe).

The solution starts with moves backwards :

And now the solution proceeds with forward moves for [Mate in 1 move] :


Sixth Tzuica Tourney (Tzuica is a beverage from Romania)
Judges : the Romanians Vlaicu Crisan and Eric Huber, who proposed the following theme :

Notes :
Helpself - problem is a help-problem in the initial n-1 moves (Black plays first and helps), which becomes self-problem in the last move (Black is forced to play). The final goal is mate (for hs#n problems) or stalemate (for hs=n problems).
ODT : Orthogonal / Diagonal Transformation : That which happens on rows and columns, happens again on diagonals.

Key : 1.Re7! (blocks a future flight) Rh8 (prepares a Rook – Bishop battery)
2.Bg8 (covers, to allow the King to take position) Bd5
3.Ke8 Bxg8 (the battery is complete, with annihilation of the white piece)
4.Qc6+ (the Queen gives check) Be6# (the battery is activated)

Judge's comment : Reciprocal black batteries obtained in a very economical setting. In each solution the white piece shielding the wK is captured by its black counterpart, creating a battery. The black battery is activated by wQ checks. Mates are model and are achieved by simple (not double) check. An amazing achievement by the Greek composer for his first helpselfmate problem!


8th Sake Tourney (Sake is a beverage from Japan)
The Japanese Sake Tourney this year is dedicated to the memory of Masazumi Hanazawa
(1944-2007), who was one of the pioneering composers in Japan.
Judge : Tadashi Wakashima from Japan, who proposed the following theme :

Note : Zeroposition is an initial position, from which (with small changes) twin problems are produced.


Note : When the Transmuted Kings are threatened by a piece, they move and capture in a way similar with the movement of the threatening piece. (If the wK is threatened by a bR leaves his square moving like a wR).

Judge's comment : Most suited to the spirit of the tourney. What is the most surprising is the fact that this could be done without any artificial twinning. I just love it!

Theme : In a helpmate two-mover, with W1 (=first white move) a black piece is unpinned. Fairy conditions and pieces are allowed.

Judge's comment : Surprising and aesthetically very pleasing shut-offs in the W1 moves, but the black play (comprising of square blocks only) even if accurate is less sophisticated. 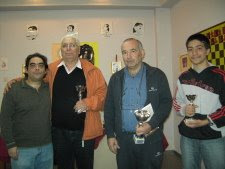 More photos and the problems can be found here.

After 20 years, the Chess Problem Solving reappears in Patras, which has seen great solvers in the past. A Solving Contest will be held in the Chess Club of Patras : Sunday 23-11-2008, 11:00 pm. See details (in Greek) at the site of the Chess Club.