Siaperas Triantafyllos, (01 August 1931 - 25 February 1994), all his life was promoting chess matters, as player of games, as composer of problems, as man of the press, as book writer, and was very successful in all his endeavors.
He was a decent person, with excellent memory and erudition, and when he was teaching, his politeness was evident. 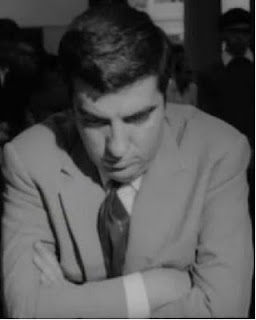 He held the Greek record for blindfold chess with six chessboards.

Siaperas Triantafyllos up to his twenties has lived in Yugoslavia, where he was busy composing chess problems and teaching composition to others. Milan Vuksevich, International Grand Master in composition, in every opportunity in his books and articles was thanking his tutors. In “Chess by Milan” (1981) Vuksevich writes: “Great teachers never die – they are the only life form which reincarnates! ... Trandaphilos Siaperas, friend of the family, born in 1933, was the problem editor of Belgrade ‘Sah’ from 1946 to 1951. He had a gift to hide his superiority while giving you the knowledge. He played ferocious attacks and created beautiful Bristols and reciprocal effects”.

Siaperas moved to Greece in 1952. For almost fifteen years he was playing chess in Thessaloniki (=Salonica), at club “Enossi Skakiston Thessalonikis” (=Union of Chess players in Salonica). He lost no game from the 110 that he played in local championships and cup tourneys, where he was every time the first winner.
In 1956 he became for the first time chess champion of Greece. He became national Master. He took part, playing on first chessboard of the Greek National Team, in the 12th Olympiad at Moscow (U.S.S.R.).
In August 1967 he published his book, (translated title: “Chess, Complete development of theory and its practical application, Vol. I”, 356 pages), first chess book of such a size that was written in Greek language. It was addressed to amateurs and to players of categories C, B, or A (higher), with systematic development of all the phases of the game (opening – middlegame – endgame). The book, with very many subjects and methodical presentation, functioned as a method without a teacher for at least two generations of Greek chess players.
From May 1968 to July 1969 he was chief editor of the monthly chess review “O Skakistis” (=The chess player), (issues #6 to #19).

He was the first Greek to become International Master (IM), taking eighth place at the international tourney “Acropolis 1968” (equal result with Lazaros Vyzantiadis). In preliminary games for selection of Greek national team he was first winner, but the coach of the team decided that Siaperas will play on second chessboard in 18th Olympiad at Lugano (Helvetia). Siaperas was very well prepared theoretically and he played a “positionel” game (strategic game of positions). Here is one of his games (06/11/1968) at Lugano:

In 1969 he knew a triumph in a great international tourney at Zagreb (Yugoslavia) taking the fourth place, with only one defeat in 15 games with strong opponents, ensuring his International Master title. In Greek championship Siaperas took third place. He was the winner in preliminary games for Zonal-3 (preliminaries for World championship) but in the finish of Zonal-3 he was 16th. In inter-group games for national category A, he played on first chessboard with “Enossi Skakiston Thessalonikis”.
In 1970 he played on first chessboard of the National team of Greece at the 19th Olympiad at Siegen (Germany).
In August 1970 was first published the Ellinika Skakistika Chronika (=Greek chess chronicles), official monthly magazine of the Elliniki Skakistiki Omospondia (=Greek Chess Society), (E.S.O.). Responsible of material and Editor of publication : Triantafyllos Siaperas. It was a large size magazine with impressively good appearance and extremely interesting content for OTB chess and chess compositions, being highest in quality among Greek chess magazines. All the covers pictured the same smothered mate (Mat à l’Étouffée) changing only colours, up the issue #38-41 September - December 1973.

In 1972 became for second time Greek chess champion. He became International Judge. He played on first chessboard for Greek team at the 4th Balkaniad in Sofia (Bulgaria). He played on first chessboard for the Greek team at the match with New Zealand in Athens. He played on first chessboard for the Greek National Team at the 20th Olympiad at Skopje (Yugoslavia).
In 1973 he played on first chessboard for the Greek National Team in a match with a Bulgarian team, and then in the fifth Balkaniad at Braşov (Romania).
In January 1977, ten years after the first volume, he published his book (translated title: “Chess, Theory and Practice, Vol. II”, 356 pages). It covered middlegame with two parts : (A) Dynamic play (play with tactical combinations) and (B) Positional Play (strategic play).
In 15/11/1982 is published the first issue of the fortnightly chess review “To Mat” (=the mate) with publisher Mr. Hatziotis Costas and Chief editor Mr. Triantafyllos Siaperas. The cooperation lasted until 1984.
In 1985 Siaperas organized the first (in Greece) live solving contest at Athens Hilton hotel with great success.
Mr. Siaperas was an excellent composer. He created high quality problems and studies. From the pages of the magazines he published and of the newspapers he worked with, he always tried to promote chess compositions and to give descriptions and examples for the various themes of the problems. The published problems of Greek and foreign composers, usually were included in running solving contests.

In the next diagram we see a prized problem of Triantafyllos Siaperas, in which the black, trying to avoid mate, six times self-blocks the flights of the king.


=====
Allow me, (fourteen years after his passing) to reveal a private conversation I had with him, in order to describe the wonderful mind of Triantafyllos Siaperas.
I had organized a problem solving contest (Patras, 05/02/1984) and he called me (long distance) to learn what had happened in order to write a comment in his newspaper chess column. He said (always politely):
«Will you please tell me the positions of the problems?»
«Should I use algebraic or Forsythe notation?» I asked naively.
«You may use whatever you prefer», he said.
«2 capital-K 4 capital-Q slash 8 slash 2 capital-S 5 slash 1 small-k 6...» I started to say.
He interrupted.
«Ah! The two-mover of Kossolapov from Novosty 1963. Nice selection! Please tell me the next.»
I was speechless. Twenty four years have passed and still I cannot believe it!