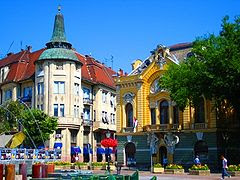 The President of the PCCC (Permanent Commission of the FIDE for Chess Compositions) Uri Avner send a note about the Fifth ECSC (European Chess Solving Championship) of 2009, which will take place in Subotica (su-bo'-ti-tsa) of Serbia, from Wednesday 06-05-2009 thru Sunday 10-05-2009.
Last date to send application for participation : 27-02-2009

Here follows the note from PCCC and the invitation from Marjan Kovacevic.


Dear PCCC Delegates,
Attached please find the Invitation to the European Problem Chess Festival and the 5th European Chess Solving championship (ECSC) in Subotica (Serbia) 2009.
On behalf of all of us, I should like to thank the Serbian Delegate, Marjan Kovacevic, and the Serbian organizers for the invitation and rich program, hopefully denoting a good start of the New Year 2009!
With best wishes for a successful and enjoyable event,
Uri Avner, PCCC President

The Serbian Problem Chess Society, the Chess Club Beograd Beopublikum and the Chess Club Spartak Subotica, with the support of the Serbian Chess Federation, have the honour to invite you to the European Problem Chess Festival and the Fifth European Chess Solving Championship.
The Festival will be held from Wednesday May 6th (arrival) to Sunday May 10th 2009 (departure) in the Patria hotel in Subotica, with ECSC on Friday and Saturday, 8th and 9th May, afternoon.
This is the very first PCCC event ever held in Serbia, and the Serbian problemists, the reigning three-times-in-row European team champions in solving, are very enthusiastic about hosting composers and solvers from all over the Europe, and from the rest of the world.
The EPCF will include many events: two Internet composing tourneys, two quick (24 h) composing tourneys, Open solving championship, standard ECSC program, solving show, quick solving (“Machine Gun”), mini-lectures, etc.
Out of the chess events, participants will be offered an excursion, including visit to the Palic Lake and to the “Wine Castle”, where the quick solving is to be combined with degustation of the home-made wine!
Subotica is a quiet town with 100.000 inhabitants, in the northern part of Serbia, 10 km from the Hungarian border. It is located about 200 km from the Budapest Airport (with a good choice of the low-cost companies), and about 180 km from the Belgrade Airport. Guests from the Central Europe could use very good train connections and railroad connection E-75.
The Patria hotel is in the heart of the town, by the pedestrian zone.
This is a well-known chess town. Many important tourneys were played in Subotica, including Interzonal tournaments of the World Championship. The Patria hotel has recently been renovated and re-opened ceremonially on August 15th 2008. The same month it hosted participants of the Team Chess Championship of Serbia, who were more than satisfied with the conditions and the hospitality found there. In July 2009, the Patria hotel will host the U-18 European Youth Festival, whose Program includes Solving Championship, too.
The pride of Subotica is the Chess Club Spartak, founded in 1930. Some respected chess masters from the past played in Spartak, including IM Andrija Fuderer and WGM Tereza Stadler. Today, Spartak is one of the very best and the youngest team in the Serbian First League. It is the current winner of the Serbian Chess Cup, and it develops its own chess school, successfully run by the GM Nikola Sedlak.

ACCOMMODATION
Prices for the participants in the Patria (4 **** hotel) are as follows:
Single Room: 60 EUR (per person per day, buffet breakfast and buffet dinner).
Double Room: 48 EUR (per person per day, buffet breakfast and buffet dinner).
All rooms have air-conditioning, satellite TV, high-speed Internet access, direct dial phone, and mini-bar.
These prices remain the same 3 days before the Festival for the participants only. Tourist tax and VAT included.
All payments should be made to the organizers, upon arrival, in cash (EUR). The participation fee for those not staying in the hotel is 50 EUR and includes registration, the festival material and participating in solving and composing
tournaments.
The hotel has a fully equipped Congress Hall with 280 seats, the Media Centre with 50 seats, the Vitraz Banquet Hall with 40 seats, hotel restaurant with 220 seats, the Makarena Cafe Bar and Patisserie with 60 seats, cafe bar in front of the Congress Hall with 30 seats, Wellness centre with sauna and hydro-massage pool, parking space with 50 parking places, newsstand, souvenir shop, hairdresser, bank with exchange office, laundry, and room service.

The festival schedule and further details will be announced by the end of January 2009.
We are looking forward to seeing you in Subotica. Happy New Year!
Belgrade, December 31st 2008
Marjan Kovacevic, PCCC delegate