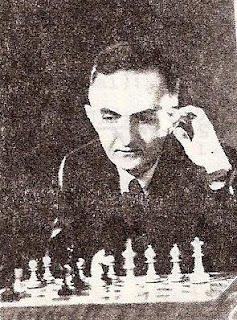 Spyros Bikos was born 1911-08-22 in Pyrgos of Ilia, Greece. He died in 1987.
In 1955, as newspaperman became member of the Union of the Owners of Periodical Press. He was editor and director of the magazine [To Mat] (January 1952 – December 1965).
In the period 1954 – 1968 he was member of the Greek Chess Federation, and he served there as General Secretary from 1961 thru 1965.
He was General Secretary of the Helioupolis Chess Club from 1974 thru 1975. To honour him, there is a Spyros Bikos street in Helioupolis (in Athens), there is the "Chess Club Spyros Bikos" and a yearly event between teams : the "Spyros Bikos Cup".
He was fond of Chess Composition and he had many distinctions in International Contests. In Olympiad of Nice, in 1974, he cooperated with Dimitris Kapralos and they were awarded with the silver and the bronze medal (second and third place). He has invented the Theme Bikos (In one phase, in one variation a self-block is exploited and in another variation the moving piece is captured. In another phase, the same two defenses have reciprocal continuation ). For this theme a composition contest was organized in Holland, in 1948, having as judge the Hollander G. Seilberger.

We see that Bartolovic, the great Croatian composer (GM, 15-06-1932, 03-11-2005), has created a Zagoruyko frame 3x3. In three phases, the same three defenses (a, b, c) are answered with different mates (ADF, BED, CBA).
Furthermore, after the defenses (a, b, c) we see in the three phases cyclic change of theme Bikos, where in each phase two of the defenses selfblock one flight of the King while the third defense is answered with capture of the defending piece.

Notes :
1) The initial Bartolovic problem [2BR1b2/2S1p2s/K5p1/4p3/R1s1k3/6QS/1B3p1r/4rq1b ( 8 + 12 ) ] had small defects and needed the correction by Ahues, in order to be saved.
2) The correction by Ahues and other details were gathered by the IM Harry Fougiaxis.
3) The leaflet with the Judgement, was given to me by Mr. Takis Drepaniotis during a New Year 2009 festivity in Chess Club of Kallithea.