Vassilios D. Lyris was one of the best composers of chess problems in his time. He was born in 1914 and he died at 15/08/1994 (same year that Triantafyllos Siaperas and Demetrius Kapralos have left us too). 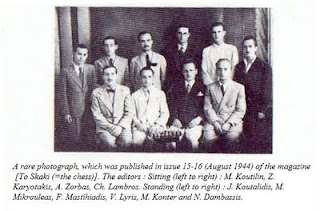 He first learned the art of chess composition in 1934, when he became subscriber of the German chess magazine [Deutsche Schachblatter]. When the first Greek chess magazine [To Skaki (=the chess)] was issued in 1943, he was one of the four members of the editing committee of the magazine together with Ioannis Koutalidis, Myron Konter and Nikos Dambassis. Since then Lyris continued composing chess problems, limited only by his work load (he was Civil engineer) and his failing health.

Vassilios Lyris has left for the future composers, as mental inheritance, 150 published compositions, mainly multimover problems, in Greek and foreign magazines. He has received many distinctions and has written articles about chess compositions in various magazines, as in [To Mat (=the checkmate)] (1956) and [Probleemblad] (1970). He was member of the Greek national team in the World Championships in Chess Composition."

The Olympiad winner composer Stavros Iatridis writing in his column [Artistic Chess – The chess problems] in the magazine [O Skakistis (=the chessplayer)] (No.4, April 1967) recites verbatim what Vassilios Lyris has written in the magazine [To Mat] (No.51, March 1956) about the basis of problem evaluation :
The Five Basic Elements for Chess Problem Evaluation
1. Acceptability :
A composition is acceptable : (a) If it is original (it is not allowed to be repetition of a previous composition). (b) If it is correct (that is all the expressed by the composer elements must be correct and in accordance with the rules of Chess Composition).
2. Economy of material :
The natural law of making a work by the least effort gives the meaning of economy, which is “inviolable principle” for the composition. The economy is not limited in achieving the desired goal with minimum material force, but is extended in maximum usage of each piece.
3. Esthetics :
This refers to the beauty of the idea and to the way of expression of the “mechanism” (in which must be a “logic” and also a continuity), and even to the various combinations with their complexity and their richness.
4. Quality of the key :
The first move – Key must initially justify the term “problem”, that is it must be as difficult as possible. The difficulty and the beauty of the key are valuable elements of the problem.
5. Exploitation of the Chessboard space :
For every problem a unique placement of the pieces exists, by which the ideal presentation of the desired goal is achieved. The criterion here is the “spaciousness” of the position and the “mobility” and flexibility of the pieces.

In this blog we have presented two problems of V. Lyris (see Problem-12 and Problem-319). He has published many problems in cooperation with Nikos Siotis or with Nikos Dambassis.

Panagis Sklavounos (who has provided material for this post) notes : "Vassilios Lyris continued to publish his compositions even in advanced age. This shows that the occupation of problem composition is independent of age. It depends only on the free time of the composer and his availability."


This is the first published problem of V. Lyris.

Lyris was awarded with a prize using theme Martin in 1949 and many years later, in 1985, he received 3rd prize in a composition of the German magazine 'Die Schwalbe' perfecting the same evergreen theme.


Key : 1.b3! Ra4-a7 2.Qa6 Rxf4 3.Qxe2 Rf4-a4 4.Kxf3 Rf7#
Exchange of positions of the two white Rooks. The white Rook annihilates a black Pawn and the black Queen annihilates a white Pawn, in order to create the final picture of mate.