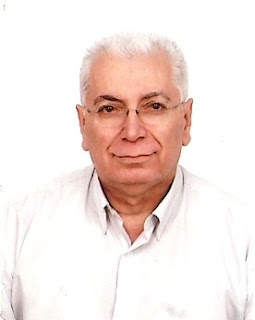 "I learned chess in my fourteens (rather late) when a known detergent here in Greece gave as a promotional gift a plastic chess and a leaflet of playing rules.
My first chess book, bought in 1964, was [To Alphavitario tou Skakisti (=The Alphabet book of the Chess-player)] by Eftyhis Vardoulakis, (Athens, 1958).

In 1969, when I entered the Polytechnic School of the University of Patras (Greece), I participated in the chess championship of the university and I won without a defeat. (I have never received my prize, a cup sent to me by the Chess Union of Students (based in Athens)).

In 1970, I won the Youth Cup of Western Greece, in a tourney held by [Fysiolatrikos Patron]. In the championship of the university, where I was responsible for carrying out the games, many better players participated (Hatzithomas, Tsourinakis, et al.). I noticed then that my academic grades were lowering, because my occupation with chess matters was too intense. I discontinued playing chess, I dealed for a while with postal chess and finally I turned to chess problems. I was solving problems in newspapers and magazines, I took part in solving contests and also I tried to compose chess problems.

When I was General Secretary of the [S. O. Patron (=Chess Club of Patras)], I started teaching lessons of 'artistic chess' to children. (See problem-233 composed in 1983 by the young chess-players Maroulis and Skoularikis, after these lessons).

The magazine [To Mat] (issue 26, 15-01-1984), edited by Triantafyllos Siaperas, honoured me by dedicating the problems column to my compositions. (You may see them below).
After the Chess Olympiad 1984 in Thessaloniki, I abandoned chess.

In 2006, I started to write some articles about chess problems in the Internet Wikipedia (Greek language). In order to write for contemporary matters, I tried to find old friends and so I met again with Harry Fougiaxis, who had become in the meantime an international maitre (IM) in composition.
He motivated me and I participated in our national solving contest 2007. I observed there that the solvers were only 20 from all over Greece, very few in comparison with a local chess tourney, planned to start in the same place after the solving contest, with 160 small players.
I enhanced then my old chess problem notes, and I asked from various chess clubs to make one of their rooms available for chess problems lessons. Only [Panionios of New Smirni] gave permission, but the participation was minimal.

In 2007 I gave book-form to my notes, and I started to give away copies to friends, but I was sure that something better should be done.

In 2008 I started to publish the blog [http://kallitexniko-skaki.blogspot.com]. It seems now that it was a good move. After six months I count more than 5000 discrete visitors from all over the world, and many of them repeat their visits more than 200 times. (You read the english language version [http://chess-problems-gr.blogspot.com] of this blog).

I hope that the young problemists will find these posts useful and that better days for the 'artistic chess' will come."

Exercise 6. The solutions are written after the problems.


From which diagonal does the Queen give mate?

Square e2 is just promising, but d5 is critical.

Interesting mate pictures from all the pieces.


Solutions of the problems