The 10th International Solving Contest, for 2014, is announced

The year 2013 has given me joy with international distinctions, as similarly happened to various Greek composers and I am happy for them when they achieve better awards than me!
There were also some cooperations, not yet published, which gave me great satisfaction with their beautiful results.

This same year I was disappointed when I tried to organize regular gatherings for friends of chess compositions in a place, for exchanging news and ideas.
There was no significant interest or maybe there was not enough publicity for this matter.
If someone is learning about this just now and is interested, he can contact me.

In the next year 2014 I suppose that things will become better.
There is a new move by Nikos Mendrinos, The Cup of Greece, solving contests happening simultaneously in many cities of Greece. I hope that this will give the needed push to increase of the number of the Chess Composition friends.

Wishes for nice holidays for all!

Holiday problems you may find at the following:

A story with mate in various amounts of moves (relevant with which piece is stricken by the bullet)...
http://en.chessbase.com/post/chebase-puzzles-a-dangerous-game-171013

In "series" compositions, one side makes moves alone, alters the position in some fashion, and when its moves are completed, then the other side mates or stalemates, accordingly with the stipulation.

Today we will see a ser-s=198, that is a series inverse stalemate in 198 moves. The white plays 198 moves alone and in the last one the black plays and is forced to stalemate the wK. This composition was awarded with 1st prize in a ChessCafe.com tourney and is a world record in its category. (See the presentation with a Sherlock-Holmes-like story in page 5 of the document : http://www.chesscafe.com/text/puzzling54.pdf)
Four black Pawns have been promoted to bQ, bR, bR, bR. The wK has difficulty in moving around the chessboard with the assistance of the wB, but the wK is obstructive and the wB makes large rounds.
During the writing of the solution, we omit the moves which are easily deducted. 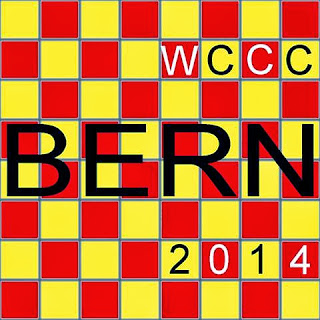 From the Greek composer Carlo DeGrandi we received an e-mail about the Award of the composition tourney Mario G. Garcia-65 JT, where he has received 1st-2nd Honourable Mention in threemovers: Award

There was another recent distinction in Aleksandr Kuzovkov-60 jubilee tourney (pdf).

The first app for chess composing on smartphone is here!

Mr Panagis Sklabounos discovered and sent to me a selfmate by Ioannis V. Koutalidis, which was published in the Greek magazine "Helios" in 28 Aug. 1946.
As I have mentioned elsewere, mr I. Koutalidis, editor of the chess column of the magazine, motivated and decidedly cultivated the talent of young composers (Vyron Zappas, Nikos Siotis, Dimitris Kapralos) of that time

In a selfmate, White plays first and forces Black (who is resisting) to give mate.

Is it not chess? 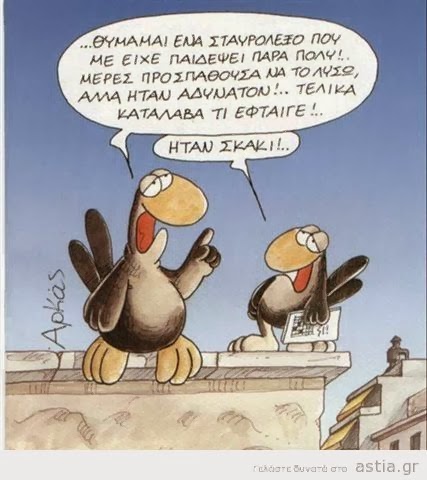 -I remember a crossword, which tormented me! I was trying to solve it for days, but it was impossible! ... Finally I understood what was the catch!
-It was chess!

Mr George Makropoulos is the head of Greek Chess Federation. He is also a high ranked person of FIDE.
In this interview he says very interesting things, that it is useful for anyone to know.
Enjoy the reading.

Kyriakos Fragoulis (1935 - 1997), from Leykada island in Greece, became well known in composing circles with his studies. There were other Greeks also creating chess problems of various types, but Kyriakos Fragoulis was composing exclusively studies.

Study is a position with stipulation "White plays and wins" or "White plays and draws" without specifying in how many moves we must achieve it. The study is like an endgame, but it is a composition, it is not coming from a game.

The players of over the board chess are solving studies as an exercice.

These studies were sent to me by Panagiotis Konidaris from Meganissi (an island near Leykada), who had actually met Kyriakos Fragoulis. Panagiotis says that he found them in some old and turned yellow pieces of paper (thanks Panagiotis!), and they are unpublished, as far as I know.
Their solutions are visible only if you select the text between the square brackets [...].

As we have already mentioned, Nikos Pergialis is a special kind of composer.

He is composer and singer of rebetiko songs, the last rebetis of our time. Here you can listen him singing a song written by the great Markos Vamvakaris : http://www.youtube.com/watch?v=4DQ8Ad55KXw

He is also a composer of chess problems, favoring beautiful and frugal positions.

Mate with two Knights on the edge of the chessboard

There is a beautiful problem by the French poet and novelist Alfred deMusset since 1849, which shows a mate with two Knights on the edge of the chessboard. In order to achieve such a mate, one must have another black piece on board, which may disappear in the final picture of mate, or a pawn not too advanced (see Troitsky line).


We have composed, together with the Italian Vito Rallo, problems with similar final mates, but using another fairy condition, Andernach (the capturing piece, changes colour).

Here are some Awards from the composition Tourneys in WCCC, Batumi 2013.

The president of WFCC mr Harry Fougiaxis has compiled (22 Oct 2013) a bulletin file with all the proceedings in Batumi.

World Championship in Solving, for Teams and Individuals

For the world championship of solving chess problems WCSC, which is organized during WCCC, the full results are published here : http://www.wfcc.ch/competitions/solving/wcsc13/

Next WCCC in Bern, Switzerland

Next year, in August 2014, the WCCC (World Congress on Chess Composition) will be held in Bern, Switzerland.

The results were published in the page http://www.wfcc.ch/competitions/solving/open-solving-batumi-2013/

Today, in Batumi of Georgia : http://wccc2013batumi.ge/schedule.html 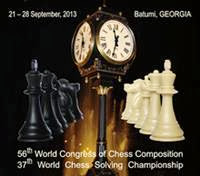 When there is good disposition and interesting subject, the language problems are set aside.
Here the French (who is wearing the t-shirt of the Italian problemists) speaks English and there is translation to Slovakian.
Posted by Emmanuel Manolas at 9/18/2013 11:32:00 am No comments: Links to this post


It is the 12th Championship in Solving Chess Problems in Greece.

Try to solve these 12 problems. The solutions will be shown if you select the text between the brackets [ ].

The relevant site for this event is here : http://www.wfcc.ch/competitions/composing/9_wcct/

There are pdf files available for download with all the contributions.

The results are here.

At this time of the year, those composers wanting to participate to the Tourneys of the World Congress of Chess Composition, are over their chessboards trying for their best. I am one of them and I am sorry if the posts in this blog are not frequent.
New tourneys are continuously announced, some of them open for composers from all over the world (not only for the participants of the congress).
Sometimes we go astray, not following the strict guidelines of the judges, and we make other compositions, just for fun.
Today's nine-mover could be sent to one of the Batumi tourneys if it was difficult and two-mover! But it is not, so I present it to you as an exercise. If you write a comment with the solution, please include the specific one of the tourneys I was implying.

World Championship in Composition for Individuals, 2010-2012

The World Federation for Chess Composition (WFCC) has published the results 2010- 2012 for the World Championship in Composing for Individuals (WCCI).


Congratulations to the winners and to all the participants.